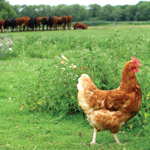 In wake of the recent horsemeat scandal buying British has become even more important to many of you because you know that rigorous food production standards are applied throughout this country and you can trust what you are eating.

At Primrose Vale we share this enthusiasm for British produce alongside growing our own fruit and vegetables. Our passion for foods produced and locally farmed from Gloucestershire and its surrounding counties is also hopefully evident.  By stocking lots of local produce our aim is to provide high quality food, uncomplicated traceability, as well as supporting local farmers and producers and ultimately the local economy.

However, since 2007 when the shop opened, to provide a more complete range we have also looked at suppliers from further afield such as Dorset, Somerset, Devon, Cornwall, Staffordshire, Shropshire and into Wales.  Above all else the product has had to be something a little different, not available everywhere and sensibly priced.  Hope you approve.

Many of you have also confirmed over the years that if necessary you are happy to purchase foods from further afield, as long as they have been responsibly sourced, such as fish from the Cornish Catch.  Very occasionally the decision is made to purchase a product from overseas such as pasta and rice but that’s because many of you have requested these  ingredients and feel passionate about avoiding larger retailers.   When sourcing these foods care is taken to check their provenance. We support small producers in the country of origin and locally based middle men such as The Real Olive Company – Bristol.

Other changes such as Tyrells becoming a major player in the luxury crisp market, also occur.  Initially Tyrells were independently run but they were bought out and are now available in most major food retailers.  However, they are still made in Herefordshire from their own potatoes.  It’s at times like these when we wait to hear how you feel about such matters, as to suddenly switch brands could be a major inconvenience to some of you.  Alternatively we look to stock a more comprehensive range as quite often only a limited range can be bought elsewhere.

Finally, if you ever do have any suggestions or questions about what we sell please speak to a member of staff.  We aim to please.